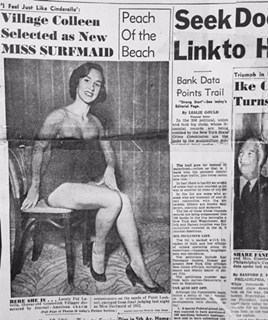 The things we do, the things we are, what we want to be, what we fail at, what fails us, when we succeed, brilliant moments of glory, all our epiphanies, when the stars align, what we let go of.  She knows none of this.  Gone but still here.

At 19, she won the beauty contest, a highlight of her life.

At nine years old, from a Catholic family of seven, she discovered drama class with Helen Murphy at The Greenwich House in Greenwich Village. She went on to study at New York’s High School of Performing Arts, where her classmates included Sidney Lumet and Dom DeLuise. She took elocution lessons to lose her Lower East Side accent, she made the rounds as a model, taught herself to smoke, and started going up for commercials.

When I was in elementary school, she performed at The Actor’s Studio, at Playwright’s Horizons, The Manhattan Theatre Club, The Arc Theatre, and one (whose name escapes me) on the Bowery in a rendition of  Pericles in modern dress, at midnight.

I was a backstage kid, her only child. One summer, I ditched sleepaway camp in Lake Placid, NY to become her roommate at summer stock. That story is for another time.

She is, she was a beauty pageant winner and a troubled soul. Whenever I went to see her in a play — like when she played the caustic Martha in Who’s Afraid of Virginia Woolf — my mother became a different person.

When she was in eighth grade and used to faint from the weight of early morning mass, the nuns wanted her to become one of them, a girl of the cloth. She said she considered it, but couldn’t make the commitment to God. At 26, the church informed her that she’d been ex-communicated by marrying my father, a handsome Jew.  The way they described it, she’d had a falling out with God.

I’ve always been sure there is something more than what we see or what we know. I’m sure because I don’t like the alternative. I’m certain there are things that are ineffable. Watch a baby being born, or a grey whale breaching toward the sky, or any mediocre purple sunset . It occurs to me that despite the church’s promise of God’s unending love, you can be in one minute, out the next. Any one of us could have a falling out with something greater.

Sometimes I think the torturous road my mother has been traveling, the loss of memory and with it the loss of identity, of place and time, of past and future, and of existence itself, is the cruelest one. A falling out with God.

Writer/educator/mama originally from NYC, Deirdre lives in L.A., She is the author of the story collection, Real Lives of Married People, and the creator of DOGGED, a series about memorable canines and their human friends. She teaches creative writing and more. Coming soon...workshops at writersgarage, L.A. View more posts

This site uses Akismet to reduce spam. Learn how your comment data is processed.